To obtain pergolide you need a prescription from your veterinarian, which he or she should give once blood tests confirm high ACTH levels. Once a horse is diagnosed with PPID (Pituitary Pars Intermedia Dysfunction)/Cushing's Disease, he/she will be on pergolide for the rest of their lives. Normally, pergolide should never be administered to a horse with normal ACTH blood levels; however, no PPID test is perfect and with a difficult to control laminitis case, your veterinarian may decide a trial of pergolide is warranted. 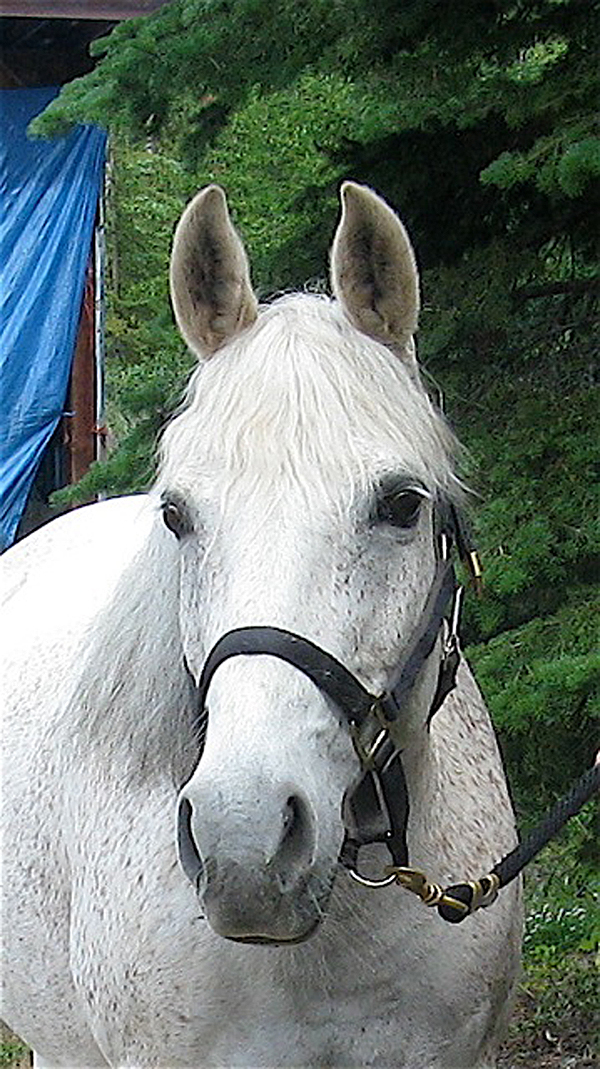 Each horse is an individual. Some are laminitic with almost normal ACTH levels. Others can have an ACTH level hundreds of units higher than lab normal ranges but are not showing laminitis. For some, laminitis is the first physical symptom of uncontrolled PPID.

Horses are generally started on a dose between 0.5 and 1.0 mg. Most are well controlled on 1.0 mg for a full-sized horse. Many horses, especially advanced cases, require more pergolide to control ACTH, up to and possibly beyond 17 mg, as reported by ECIR Group members and their veterinarians

There are two ways to determine if your pergolide dose is correct. One is by careful monitoring of the horse's physical symptoms. More accurate (but more costly) is by monitoring the level of the hormone ACTH with blood tests. Whichever manner or combination of the two used, you should closely monitor physical symptoms and whenever you see an increase in physical symptoms, consult with your veterinarian about dosage adjustments.

How to Use ACTH Blood Tests to Determine Dosage

PPID horses taken off pergolide exhibit a return of symptoms after 2 - 4 four weeks, so it is recommended to wait 2 - 4 weeks once a target dosage has been reached to either re-evaluate physical symptoms or run an ACTH test.

How to Monitor Physical Symptoms to Determine Dosage

Though not as accurate as blood tests, some ECIR Group members choose to monitor physical symptoms to determine dosage. Careful daily observation is needed. This may be difficult for owners who board or who are not involved in the day-to-day care of the horse. It is vital that owners know all the symptoms of both PPID and Insulin Resistance (IR) because out-of-control PPID can cause or worsen IR, which is the major factor in laminitis.

In all horses, ACTH normally and naturally rises in Autumn and drops in Spring. PPID is confirmed when the ACTH stays high year round, but in less-advanced cases of PPID, the ACTH may only be out of normal during the Fall. These seasonal influences can lead to a mistrust of autumnal test results when making a diagnosis but we now have a reasonable understanding of what the upper-normal level should be seasonally, so testing for diagnosis can be done in Autumn as well. At any time of year, a high ACTH puts your horse at risk of developing IR and hyperinsulinemia with the risk of laminitis and founder.

When running ACTH tests to monitor dosage, there are no "false" highs — especially when preventing laminitis is the goal — and Fall is a time when many horses get laminitis.

ACTH tests can be run to check pergolide dosage at any time of the year. To prevent seasonal influences from skewing your ACTH test results, blood should be drawn and tested at the same time of the month and day as in previous years. With the higher threat of laminitis between August and December, and to keep veterinary costs down, at a minimum dosage-check ACTH tests should be run in early July, again in September, and anytime an increase in physical symptoms is noticed.

There are several formulations for pergolide available: liquid, loose powder, tablets, capsules, and even cookies. Some vets are not aware that pergolide formulation is vitally important to the shelf life of the drug. There is no benefit to the horse or cost saving if the drug is inert. Save yourself time, money, and grief by insisting on a prescription for the formulation that best suits your needs.

Liquid pergolide is pergolide suspended in aqueous solution, making it very unstable, degrading quickly, and was found to be sub-potent at 30 days. When water is used as a carrier it must be stored in the fridge to prevent bacteria or possibly fungus from growing in the bottle and discarded after two weeks.

Compounded loose powder is less expensive than capsules or coated tablets, with a longer shelf life than liquid pergolide. Loose power is easier than capsules when measuring dosage change; however, when powder is exposed to humidity and air each time the bottle is opened, potency decreases over time. There is also the added problem of the carrier settling in the container making the dosage inaccurate. Discard after 30 days.

Prascend, coated tablets in individual blister packs, have the best stability and shelf life but are high in price. In the U.S. the manufacturer recommends no higher than 2 mg dose per day. In the UK, the recommendation is 5 mg per day. Research conducted by the manufacturer and submitted to the FDA for approval of the drug found that nearly one-third of horses in the study did not have ACTH controlled on this amount. ECIR Group members have also found this to be true, with many horses not controlled and suffering from laminitis as a result.

Compounded encapsulated powder is the formulation of choice for many of the ECIR Group. Encapsulation provides a barrier to air and humidity that helps preserve potency. Additionally, since the dosage measurements are done by the pharmacy, it is more accurate than measuring powder yourself. Research has shown that encapsulated pergolide capsules retain 90+ percent potency at 30 days. ECIR Group members have found success with this formulation, especially when higher levels are needed to control ACTH and prevent laminitis. Members have taken on independent testing of capsules which found potency well retained.

Data indicates pergolide will be more stable if kept refrigerated, ideally in the door. Care should be taken to make sure the container is tightly sealed since high moisture in refrigerator air could compromise stability. Some members keep a long-time supply in a double container and put a week's worth of capsules in a smaller container.

Freezing will greatly reduce the potency of pergolide. Delivery in winter should be monitored. If possible, ask your pharmacy to request a signature upon delivery.

Pergolide should be kept from excess light by using a paper bag, opaque container, or other device.

There are two temporary but common side effects that are caused by pergolide: depression and lack of appetite. This is known in the ECIR Group as the "pergolide veil". When first starting pergolide, or when dosage is increased too quickly, some horses become lethargic and uninterested in food. Tapering/titrating any change in dosage is the best defense against side effects. When properly tapered, the ECIR Group horses have had either no pergolide veil and feel better right away or the veil symptoms resolve quickly.

Adaptogens can also help. These are natural substances that help the body block negative responses to chronic stress. A formulation with a good track record in the ECIR group is APF (Advanced Protection Formula from Auburn Labs). A less-expensive adaptogen is Canadian, American, or North American ginseng (Panax quinquefolius). Some ginsengs cause elevated insulin so be sure the Latin name is correct.

The pergolide veil can be very distressing to owners. It is often the case that horses starting pergolide are also starting a new diet. The horse certainly appears to dislike the new food but it really is just the veil making him/her less inclined to eat. Hang in there –- they do get over this stage. Once the horse gets used to being on pergolide, he/she will start to eat normally again.

Whether increasing or decreasing dosage or just starting pergolide for the first time, taper at a rate of 0.25 mg every three days. Ordering a supply of 0.25 mg capsules makes tapering easier.

Acepromazine is a dopamine antagonist and counteracts pergolide. A single dose for a veterinary procedure may not be a big issue, but it may be a consideration if the vet puts a horse on ace several times a day as a vasodilator for laminitis. This is a judgment call and should be discussed thoroughly with your vet.

How to Get Them to Eat It?

During the pergolide veil many horses will not take anything slightly suspicious. Try mixing the pergolide with water or plain yogurt and promptly syringing it into their mouths. Safe treats often can be used to hide the pergolide: try a prune, a single large grape, or a section of cored-out carrot. Some members resort to less-safe treats, which can be dangerous if your horse is border-line laminitic; if you feel you have to go that route, use as little of an unsafe treat as possible. Some members put pergolide powder on wet beet pulp. The drawback to this method is that sometimes horses dribble food –- especially if not being fed by hand — making it impossible to tell if the horse ingested the full dose.

The secret to success at medicine time is relaxation, perseverance, and using a carrier (treat) that works for your horse and you. Try to think of "medicine time" as "treat time" instead. Expect and plan for spit-outs. Stay calm; don't let the horse know this is a "bad" thing. Just pick up the cap and try again and again until it goes down. If you get upset, your horse will get worried and it will only increase his or her mistrust and slow down the process.

Make things easier for yourself by giving the "treat" in a location where it is easy to spot and retrieve the ejected white capsule. Extra treats fed as a "chaser" just after the capsule has gone in the horse's mouth often stops spit outs. It will take a little time and extra treats but eventually your horse will come around.